Vancouver Canucks forward Zack Kassian fought 13 times during the 2008-09 season as a member of the Winsor Spitfires. (Image courtesy WikiCommons)

Nearly one full season complete, and it appears the Ontario Hockey League’s sanctions on fighting have put a serious dent in the amount of fisticuffs you’re seeing during league action.

Before the puck had dropped to ring in the 2012-13 OHL season, the league made several rule changes. The one receiving the most attention — and rightfully so after what feels like years of debate surrounding player safety, concussions, and fighting — was the OHL’s decision to put limits on player fights.

The amendments to the player legislation (which do not appear in the leagues downloadable rulebook) are as follows:

Though the change to the rulebook was met with mixed reaction, the rule changes allowed for the league to protect its players and take a step towards what will likely become a league sans fighting. It’s for this reason that fight-fans were outspoken on what the implications could be for the future of hockey — one they wish to have fighting be a part of.

It seems fitting to bring this up now, if anytime, just a day after the Ottawa Senator’s Dave Dziurzynski suffered what looked to be a pretty serious concussion at the hands of Toronto Maple Leafs’ Frazer McLaren under a minute into the Ottawa-Toronto game last night. While the blogosphere continues to argue the outright removal of fighting (something I’d guess is unlikely to happen for many years) or just limiting it to stiffer punishment for staged fights, the model I easily see the NHL adopting is something similar to what the OHL has taken on: a fight limit.

I wasn’t sure whether or not the fighting ban had been all that effective in the OHL, so I took to hockeyfights.com to find the fight statistics. It seemed to me that limits — if you can call really call ten fights a limit — would barely restrict pugilists from dropping the mitts and throwing. However, this was far from the case.

Compiled below are the fight statistics for all 20 OHL teams over the last five seasons*: 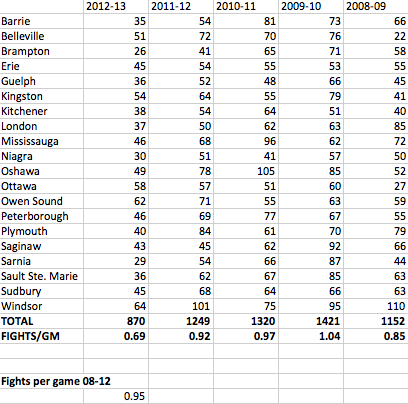 What the data shows is that fighting, plain and simple, is down. In fact, fighting has dropped by over a quarter in just one campaign. Although a single season may be too small a sample to really make any firm statements, it’s hard to argue with a drop like that.

Not only that, I took a look at the fight leaders in the OHL on a season-to-season basis. No one has dropped the gloves more than 11 times this season (two players) with several at 10 on the year. In years prior? How about a top-5 from each of the past four seasons?

Not only has no player eclipsed 11 fights this year, they’ve come nowhere close to touching the fight leaders from years passed. McLaren’s fight was number six for him on the season — in just 17 games. Over the course of a full season, McLaren would be on pace for nearly 30 tilts. If we care even a little bit about the players, we’d try to curb the absurdity of a player fighting almost every other game.

Greg Wyshynski, he of hockey überblog Puck Daddy, pointed out that we can’t have it one way or another: it’s either fighting or no fighting. Staged fights would just give way to players skating half a shift before giving “reason” for a fight. While losing the passionate fight (the example of Lecavalier v. Iginla is often brought up in this situation) might be something all fans may not want to see abolished, sometimes things have to change for the greater good.

I used to be on the other side of this argument, but after seeing the way Dziurzynski collapsed to the ice and following the deaths of Rick Rypien, Wade Belak, and Derek Boogaard, I can’t really say I’m all for fighting anymore.

However unlikely it may be that the NHL would adopt any legislation against fighting (it was put very well today that the league, plain and simple, doesn’t care about the players’ safety), I would say stiffer penalties for the prototypical “goon” would be a step in the right direction.

And hey, if nothing else, it would mean a better product on the ice.

*The 2012-13 season is incomplete, with each team having anywhere from two to five games remaining. However, the fight numbers for the regular season shouldn’t shift a great amount in the next week or two.