Chad Gowing fell into such a deep darkness in late 2008 that he holed himself up in his mother’s basement. He’d cry uncontrollably, he lost his job and, eventually, he was diagnosed with depression and bi-polar disorder. No medication could right him. In fact, it just made him worse. There were suicide attempts, Gowing says as he takes a drag from his cigarette, his eyes darting everywhere but back at me. It was getting to the point where he didn’t know if he’d live.

“I told my doctor, ‘I either need help fast, or I’m going to murder someone,’ and he told me I’d go to jail,” Gowing recalls, the usual brightness gone from his voice. “I looked at him and replied, ‘At least then I’ll get the help I need.’”

Gowing figured he had no other choice, so he checked himself into a rehab clinic in Guelph. It took him less than a day to determine he wasn’t anything like the others receiving care. He packed his things, left the clinic, and turned his life around, he says. His doctor sent him away with simple directions: “Do something you love to do. And make it a party,”  recalls Gowing, now 29. “That’s where I got the idea: my friends and I like to wrestle, hardcore wrestle. So that’s what we did.”

Today he’s the owner, founder, and star of his own wrestling promotion. He is Deathproof. 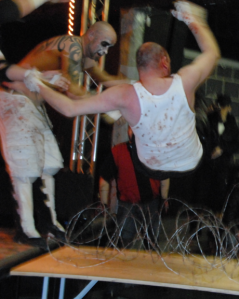 Deathproof Fight Club is a perfectly choreographed spectacle of arms locked and bodies tossed. Each performer is well trained, and it shows in the way they move. If fans get lost in the dance, a thundering chair shot will bring their attention back. It’s the violence – extreme violence, Gowing will tell you – that sets Deathproof apart from any other wrestling promotion. And he wouldn’t have it any other way.

“I had my first match in (2001),” Gowing recalls.“I took a cheese grater to the face, it was a big ‘Shoot Yourself In The Foot’ for the business moment. And we weren’t selling it. It was real.”

A smile spreads across Gowing’s face as he remembers the event. He describes it in gruesome, gut-churning detail. It’s enough to bring a groan and matching headshake from the wrestler lacing his boots beside him. Gowing lives for his “extreme violence” brand of wrestling.

He rattles off a list of punishments he’s endured that range from head-scratching to bordering on insanity. There have been light tubes, thumbtacks, barbed wire, and a gas-powered weed whacker all at the hands of a Quebec-based indie wrestler who went by the name Viking.

“It took us three tries to get the weed whacker actually running,” Gowing recalls. “A fan yelled at us to put it up on the middle rope, and that actually got it going. (Viking) booted me in the stomach and took control of the weed whacker. I held on to the head of it, and I was scared shitless, starting to shake. I looked up at him and he shoved it straight in my stom- ach and pulled the trigger.”

It was what’s known as a “spot” – a pre-planned sequence or combination of events. Gowing knew what was coming and told Viking before the combatants strutted to the ring that he would be the one to take the punishment, all because Viking, “had an 8-hour ride home.”

Even with the extreme style being a non-traditional version of the bronzed and oiled wrestling titans from the days of yore – think Hulk Hogan and “Macho Man” Randy Savage – they’re still entertainers of the same ilk, and they bleed for their craft.

Extreme wrestling may not have the lineage of the WWE/ WWF, but it certainly has made some roots in North America.

“I loved ECW!” Gowing says, lighting up at the mention of the promotion that made extreme wrestling mainstream. “I taped every single one of them on TNN when they were on that network, and I still have them all taped on VHS aside from a few episodes.”

It’s Gowing’s passion and childlike exuberance for the extreme style that has helped him build a respectable sta- ble of wrestlers, including 32-year-old Michelle Cooper, known to Deathproof fans as Jewells Malone. A familiar face at Deathproof events, Cooper says the reaction to a woman in extreme violence is often mixed and that some can be, “a bit standoffish,” but she has no designs of stopping anytime soon.

“My goal is to get as much training and work experience as I can,” said Cooper. “I want to go to Japan, the UK, Germany, Mexico, different parts of Canada, you know. But at the same time, I would also like to [wrestle] internationally and make it on TV. It would be amazing if I could land a contract with TNA or WWE. That would be absolutely fantastic.”

Cooper, who both kick boxed and fought muay thai for three years before getting into wrestling, said her in-ring persona is just, “Michelle turned up 10 times,” adding she’s attracted to the aggression and the attention that extreme violence brings.

“It’s not wrestling like it used to be (in the early WWF days),” said Cooper. “I’ve been seeing wrestling every single day, and it’s usually just the same old thing. Deathproof is different. It’s got a little bit more… strange to it.”

Even with the element of “strange,” as Cooper puts it, there is room in Deathproof for a more traditional style wrestler. All a Deathproof wrestler needs is the willingness to try a few new things and the want for some extra ring time. Rob “Rage” Thomson fits that bill.

“I’m not opposed to extreme violence myself,” said Thompson “I bounced at nightclubs in downtown Toronto for years, and I’ve been a part of real extreme violence. If you want me to go through tables or take chair shots, get hit with light tubes, that’s something I used to do on a regular basis.”

And when Gowing approached him about doing some of the more violent spots for Deathproof, the answer was simple.

“Dude, I’ve been doing this for years, just not in a ring,” said Thompson through laughter.

While the wrestling business has seen an upswing in smaller-sized high flyers that can bring fans to their feet with spectacular moves – some of which make you question whether physics apply in the ring – Rage says his size and stature make him unique.

Like Cooper, Rage doesn’t dream of being involved in extreme violence forever, and makes no bones about saying exactly what he wants out of his future.

“It’s main event at WrestleMania or bust,” Rage says without hesitation when asked about where he wants his career to go. “I want to get as high up in this business as I can. That’s the path I want to take. I want to be a superstar; whatever it takes, whatever I need to do. People may laugh at it, but I don’t care what they think.”

What make Cooper, Gowing, Thomson, and many of the other Deathproof fighters so inter- esting are the dual lives they seemingly live. While none are shy about their inter- est in and love of wrestling, they each live a life outside of the ring. Gowing spends his days working for a small business, and Rage – whose biceps might have biceps – is a personal trainer.

It’s Cooper who stands out the most, however. A Certified General Accountant with a degree in finance, she works her days at a consulting firm in downtown Toronto before stepping out of the office-wear and into the ring. While it may not be something they expect from the 5’4” blonde businesswoman, Cooper says her family and friends try to support her endeavours – even if that includes extreme violence.

“My family.” Cooper pauses and breaks the silence with a chuckle, knowing full well what they say and how they feel are two different things. “My family is going to support me no matter what I do. They don’t want to see me get hurt, so they don’t like to watch.”

The willingness of Deathproof’s roster to voluntarily have their skin mutilated and bodies battered at the hands of household weaponry may seem odd, but looking out for your opponent’s best interest is always in the back of every wrestler’s mind. Gowing tells me this as you hear bodies smack off the mat at Toronto’s local Squared Circle Wrestling facility. After all, wrestling is a special bond each grappler shares – a common love in all their lives that brings them together.

“You can just call these guys my family,”said Gowing, pointing out the dressing room door to where the potential future of professional wrestling trained. They’re not just people I wrestle with. They’re family to me.”

Though the only colour in their swatch is the red of their own blood, and the only dance moves they know are ones that end with a slam and the wincing expression of pain, this is their art. And for Gowing, it’s this art that has set him and everyone else apart. Deathproof reflects his life.

“I stood out. I was the guy that could not die.” 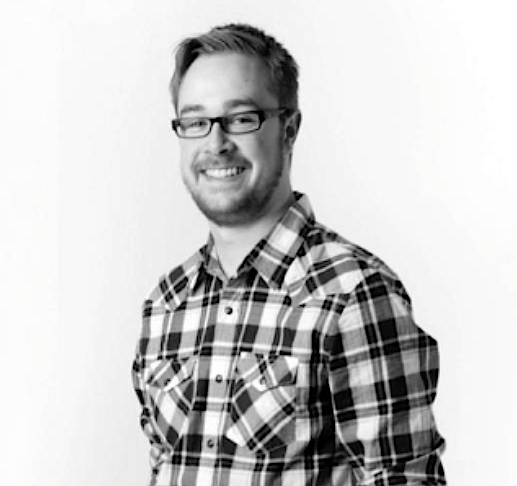