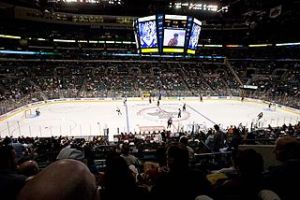 The Bank Atlantic Center, half-empty, during a 2009 contest with the hometown Florida Panthers taking on the Pittsburgh Penguins.

As fans filed through the doors of Bank Atlantic Center in Sunrise, they were greeted with blood red towels draped upon their seats. Splashed across the towels was the new rebranded team motto, “We See Red,” and as fans took their seats they waited. They waited for their Florida Panthers to take the ice for their first playoff appearance in over a decade, they waited for a head-to-head with New Jersey Devils, and they waited to roar in elation – a roar that was missing for so many years and desperate to return. The series would go seven grueling games and would end on an Adam Henrique goal in overtime. As the Panthers left the ice for the final time in 2011-12, their fans that had waited so long for any reason to cheer left them with a raucous ovation. Panthers fans had waited for rebirth, and now, with an NHL lockout, they wait again.

“The fans were getting very excited, because after the ten-year hiatus for us – not making the playoffs those years – and the team doing so well, the fans were getting into it and extremely passionate,” said Genya Adesso, Director of Marketing for the Florida Panthers.

When the Panthers took the ice at the beginning of last season, many pundits had prognosticated that the Cats – as their fans refer to them – were destined to finish the season in the basement and in line for the first overall draft pick. The Hockey News, in their September 2011 previews of the 30 NHL teams, selected the Panthers to finish 14th in the Eastern Conference, ahead of only the Ottawa Senators, and last in their division.

The Hockey News said there were, “too many ‘ifs’ in Florida,” and that relying on goaltender Jose Theodore – a former Vezina winner in his own right – would hurt the team. Well, those “ifs” lead the Panthers to a Southeast Division title, and, while it wasn’t a Vezina performance, Theodore was more than serviceable. 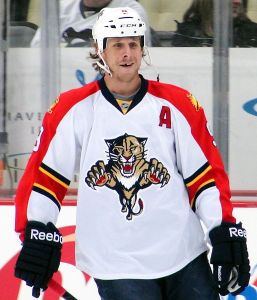 But it wasn’t just The Hockey News. Of Sports Illustrated’s Michael Farber, Darren Eliot, and Adrian Dater, not a single one picked the Panthers to appear in the playoffs. Yahoo!’s Puck Daddy, one of the most recognizable and respected hockey blogs on the internet, had their run at the Southeast Division, and only Ryan Lambert had picked the Panthers to finish higher than fourth (of five teams) in the division. Time and time again, the Panthers were underestimated. That may be why the team was such a revelation.

“During the off-season, when Dale Tallon became the GM, the first thing I thought was he’s going to rebuild this team because that’s what he did with Chicago,” said Nick Day, 27, a Florida Panthers fan who attends nearly a dozen games a season. “I wouldn’t have said they were going to win the Stanley Cup their first year, but with the players they had it was probably going to be one of the best looking teams they’ve had since the ‘90s. I said to people I knew that this team was going to make the playoffs, and no one believed me.”

The team’s performance helped the Panthers put people in the building on a consistent basis for the first time in years. The Panthers hosted 17 sold out contests in 2011-12, more than the previous five seasons – combined. Their total attendance jumped by nearly 40,000.

“Their first game against the Lightning was sold out,” continued Day. “I wasn’t surprised – but then again, I was surprised at the same time. Most of the games I go to are against more popular teams.”

Success is a key factor to putting people in the stands, and the Panthers weren’t the only Sunbelt franchise to be blessed with attendance increases. The Tampa Bay Lightning, with superstar Steven Stamkos, averaged 1,000 more patrons in 2011-12 than they did in 2010-11. Adding to that, two of the three Californian teams – the Los Angeles Kings and San Jose Sharks – filled their respective buildings to capacity every night.

However, there are two sides to the Sunbelt coin. The struggling Dallas Stars were 28th in average nightly attendance, the Anaheim Ducks were 26th, and the anomaly that is the Phoenix Coyotes were in the basement with an average attendance of under 12,500.

“Florida is a very interesting market,” said Adesso. “Fans are very fickle here. Basically, in a nutshell, when the team starts winning, that’s when fans show up. I can tell you that our product on the ice was extremely well put together last season.”

Dr. Dan Rascher, president of SportsEconomics and Director of Academic Programs and Associate Professor for the Sport Management Program at the University of San Francisco, said in order for Sunbelt teams to build a fan base, raise attendance, and keep economically sound, they need to develop youth fans. Most notable for their efforts in this regard, said Dr. Rascher, is the work of the San Jose Sharks.

“[The Sharks] cultivate kids and turn them into hockey fans,” said Rascher. “That takes a generation or more. In other words, they’re willing to put in the time and effort – they financially manage ten ice sheets in six different locations in the Bay Area – and they promote junior hockey and adult hockey leagues.”

Rascher added that when teams target young children and, more or less, “create” hockey fans, they have a better chance to build off that success. While building a fan base from children may take a significant amount of time, Rascher said that it is one of the most surefire ways to survive in the Sunbelt.

“[Creating fans] is the way to succeed in the Sunbelt,” said Rascher. “You have to be willing to put in the 20 or 30 year investment in growing the fan base. Some teams have done that, and some teams haven’t.”

All may not be lost in the Sunbelt, though. What may be the saving grace for the Sunbelt is that hockey has been, almost against all odds, gaining a steady foothold in the United States sporting world. From 1990-91, when USA Hockey began keeping membership statistics, to 2003-04 the number of young men and women enrolled in hockey grew from just over 195,000 to nearly 450,000 – an increase in enrollment of nearly 57 per cent. Enrollment numbers as the lockout loomed in 2004-05, and after the cancellation of that entire season, dipped by nearly 8,000 players, showing quite clearly the damage no hockey – especially none being visible to youth – can do to the burgeoning hockey markets.

Once the NHL became visible again USA Hockey enrollment jumped again. According to USA Hockey’s registration numbers, the total number of players in Arizona has gone up by 4.5 per cent since the 2006-07 season, with Texas and Florida coming in at nearly 10 percent growth, and California seeing an astronomical growth of nearly 18.5 per cent.

Make no mistake, the league is drawn to areas like Florida and Texas on promises of large markets to sell the game in – 12 of the top 15 television markets (which includes every Sunbelt team) in the US have NHL teams in their city – and sponsorship dollars. However, Rascher said this lockouts effect on the feasibility of these markets is being put in question due to the loss of sponsorship dollars. Actually, Rascher said, the NHL might lose their sponsorships to competing leagues and businesses.

“Just last week I was talking with someone who works in a competitive business to the NHL, and they said they were going after all the sponsors of the local hockey team,” Rascher said. “They thought, ‘Well, now’s our best chance.’”

For Sunbelt hockey to work, the teams need to be working in every aspect; sponsorship dollars need to be there to bring in capable players, they need to cultivate fans, and they need to have a successful on ice product. The difficulty in keeping fans interested is that, unlike teams in established markets, the Sunbelt is relatively new territory. For every San Jose, you’re going to have a Phoenix – a market that doesn’t quite work out. And it’s because the fans have other options.

“There are so many things to do in the market. We have the beach, nightclubs, and we have a very good, active nightlife with all kinds of entertainment and culture,” said Adesso. “Then we have the NBA, and, of course, the Dolphins (NFL). You’re constantly fighting for the dollar.”

Rascher’s research shows that fans will spend their money and attend – however marginally – other sporting events. In a study of the 2004-05 NHL lockout, Rascher found that attendances for NHL teams which have other professional leagues – namely the National Basketball Association – in the same area increase by several per cent.

“If the lockout is long enough, then fans do go find something else to focus on,” said Rascher. “Then, all of a sudden, maybe they don’t respond when the league returns. But the way it is, is that new fans take their seats . . . which isn’t necessarily good because then they lose a fan.”